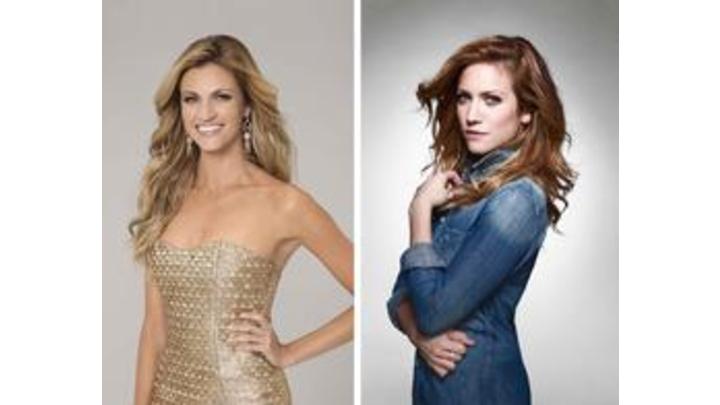 2015 “CMT MUSIC AWARDS” WILL BE PITCH PERFECT AS ERIN ANDREWS AND BRITTANY SNOW HOST THE LOUDEST NIGHT IN COUNTRY MUSIC LIVE FROM NASHVILLE ON WEDNESDAY, JUNE 10 AT 8:00 PM ET/PT

NASHVILLE– May 29, 2015 – CMT today announced that Dancing With the Stars co-host Erin Andrews and Pitch Perfect star Brittany Snow will co-host the 2015 “CMT Music Awards,” live on Wednesday, June 10, 2015 at 8:00 pm ET/PT from the Bridgestone Arena in Nashville.

Erin Andrews recently wrapped another season as co-host of ABC’s hit show, Dancing with the Stars. In her third season and 20th overall for the show, ratings soared to all-time highs in the competition for the coveted Mirror Ball trophy. On the field, Erin returns to FOX NFL Sunday in the fall, as part of the network’s #1 broadcast team and continues to cover MLB events including The All Star Game & World Series.

“Being a huge fan of country music, the CMT Music Awards are one of my favorite events of the season,” said Andrews. “I cannot wait to be around all the talented artists and bands and look forward to being a part of such a great event.”

Best known for her breakout role as Chloe Beale, co-leader of the Barden Bellas in the smash hit Pitch Perfect and the just-released Pitch Perfect 2, which recently topped both the box office and album charts, Brittany Snow is one of the brightest and most engaging acting talents to emerge in recent years.  She can also currently be seen in the second season of DirecTV’s drama series “Full Circle” and stars opposite William H.Macy in the drama feature “Dial a Prayer” in theaters now.

Country superstar Carrie Underwood is the frontrunner this year with five awards nominations including two for the highly-coveted “Video of the Year.” Lady Antebellum and Kenny Chesney followed with an impressive four nominations each. Florida Georgia Line and Jason Aldean earned a respective three nominations, while Keith Urban and Luke Bryan both scored two nods. Additional performers and presenters will be announced at a later date.

The 2014 “CMT Music Awards” was the second most-watched telecast in franchise history, experiencing growth across all screens, up +10% from the prior year with 3.0 million Total Viewers. Last year’s show also ranked as the #1 original cable telecast for the day and across Prime, CMT was the #1 cable network among P18-49, F18-49 and Total Viewer L+SD impressions. It was also the # 1 most social telecast on Nielsen Twitter TV Ratings for the day, and the # 1 most social show on cable for the week. CMT wrapped its most recent quarter on a high note, posting A18-49 gainsin both Primetime (+32%) and Total Day (+8%) over the previous quarter.

CMT, a unit of Viacom Inc. (NASDAQ:VIA, VIAB), is the leading television and digital authority on country music and entertainment, reaching more than 92 million homes in the U.S.  CMT, CMT.com and CMT Radio offer an unparalleled mix of music, news, live concerts and series and are the top resource for country music on demand.  The network’s digital platforms include the 24-hour music channel, CMT Pure Country, CMT Mobile and CMT VOD.