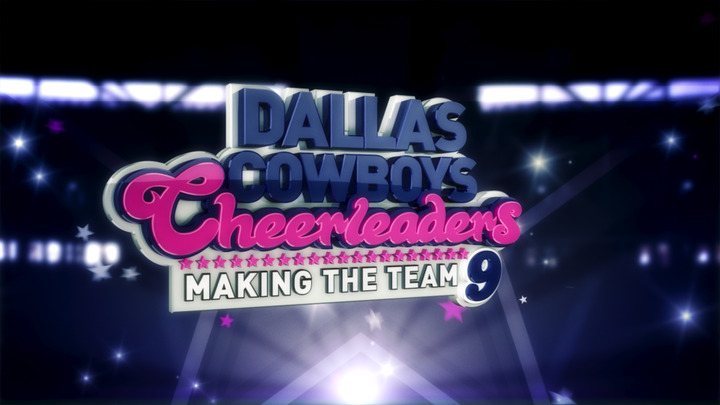 AMERICA’S MOST ICONIC CHEERLEADERS PROVE THAT IT TAKES MORE THAN JUST A PRETTY FACE AND GOOD DANCE MOVES IN AN ALL-NEW SEASON OF “DALLAS COWBOYS CHEERLEADERS: MAKING THE TEAM” PREMIERING FRIDAY, AUGUST 8 ON CMT

For the First Time Ever, Cheerleaders Everywhere Can Try for the Chance to Appear on the Series


LOS ANGELES – July 14, 2014 – Getting us in the football spirit once again are the nation’s most beloved cheerleaders when they return for the ninth season of DALLAS COWBOYS CHEERLEADERS: MAKING THE TEAM beginning Friday, August 8 at 9:00 – 10:00 p.m., ET/PT on CMT. This season, DCC hopefuls face the most talented crop of candidates from around the world the organization has ever seen. In each hour-long episode, cameras follow as the most poised and articulate rookies and veterans are put to the test emotionally and physically for a chance at making the team and their dreams come true.

Calling the shots and making the cuts are once again longtime DCC director Kelli Finglass and choreographer Judy Trammell. These hard-nosed former DCC continue to uphold the highest standards and expectations for the new squad. Kelli strongly believes that to be a DCC, you have to look like a DCC. She takes the training camp candidates to a hair salon for makeovers and puts them through fashion school to learn fashion do’s and don’ts. When some of the veterans are looking heavy to Kelli, she takes away their uniforms and puts them on weight probation and a 21 day My Fit Foods Challenge to encourage them to lose weight in a healthy manner. Kelli knows that in order to survive training camp, where they must learn 50 routines in eight weeks, the ladies must be in tip-top shape.

Joining them this season is former DCC and reality star Melissa Rycroft who will serve as a guest judge as well as mentor for the candidates. Melissa will coach the ladies along as they strive to carry out Kelli’s gold standard of showmanship and always “perform with their Ps” – purpose, personality and projection. She helps struggling girls overcome challenges they are facing and at one point, Melissa even calls a “Dance Intervention” to boost the confidence of a couple candidates in need.

Ranging in ages from 18-40, hailing from Canada, Japan, Australia and 37 states nationwide, more than 500 candidates showed up on May 10 for the first day of auditions at the AT&T stadium in Dallas, TX. Following an intense weekend of fierce competition, only 110 will survive and move on to semi-finals where they learn the world-famous kick line. From there, 55 will make the cut to the finals where they must go toe-to-toe with the 30 veterans. Ultimately, 36 lucky ladies will make the team in the end.

To spice things up this season, CMT in conjunction with the Spirit Celebration and DCC are hosting a cheer contest to find the Best Male and Female Cheerleader and Best Cheer & Dance Team in America. Determining who will win the prestigious ‘WOW’ cheer award is DCC Director, Kelli Finglass and head choreographer, Judy Trammell and veteran DCC. The competition started on 7/1 and runs through 8/1. The winners will receive a special VIP invitation to perform in a Cowboys halftime show, a plaque, autographed team photo and DCC calendar. Individuals and teams should submit a You Tube video link to info@spiritcelebration.com. Visit www.spiritcelebration.com for competition criteria. A total of six winners will be selected and revealed in episodes 5-8 of the series on CMT. Winners will also be announced on Spiritcelebration.com, CMT.com and Dallascowboyscheerleaders.net.

For photo galleries, bonus clips and more, visit CMT.com and download the CMT App. Join the conversation on the show’s Facebook page and follow @CMT shows on Twitter and Instagram. Viewers will also get a chance to watch some special sneak peeks of Season 9 beginning on Friday, 7/18, and air weekly until the premiere.


CMT, a unit of Viacom’s MTV Networks (NYSE: VIA and VIA.B), is the leading television and digital authority on country music and entertainment, reaching more than 93 million homes in the U.S. CMT and its website, CMT.com, offer an unparalleled mix of music, news, live concerts and series and is the top resource for country music on demand. The network’s digital platforms include the 24-hour music channel, CMT Pure Country, CMT Mobile and CMT VOD.