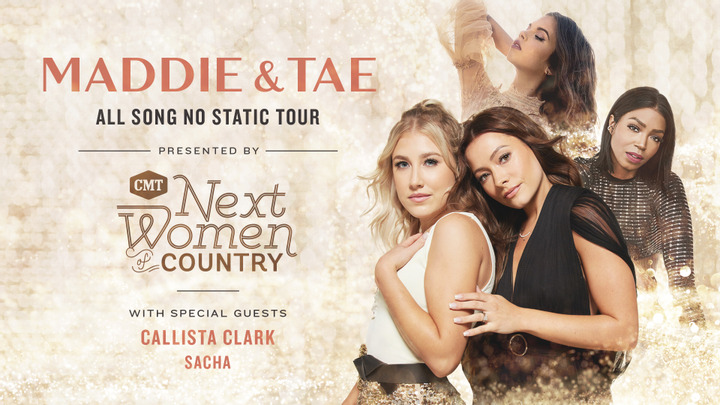 CMT and Maddie & Tae announce headlining dates for 2022 “CMT Next Women of Country Tour Presents: All Song No Static Tour”

Tickets on-sale Friday, October 29th at 10AM CT at MaddieandTae.com and CMT.com

NASHVILLE - October 25 - CMT and multi-Platinum-selling country duo Maddie & Tae today announced headlining dates of the 2022 “CMT Next Women of Country Tour Presents: All Song No Static Tour.” Kicking off January 6th in Oklahoma City, the CMT tour will make stops in major cities including Atlanta, Boston, Houston, Nashville and New York through February. Joining the duo will be Callista Clark and a CMT Next Women of Country inductee Sacha who will both appear at each stop of the 16-city tour.

Tickets will become available beginning this Friday, October 29th at 10AM CT at MaddieandTae.com and CMT.com.

Maddie & Tae, selected as members of the CMT’s Next Women of Country class of 2015, have launched to the forefront of country music with hit songs from “Girl In A Country Song” and “Fly” to “Friends Don’t” and their Double Platinum-certified single “Die from a Broken Heart.” Stacking 17 major awards nominations -- including a Vocal Duo of the Year nod at the upcoming 55th Annual CMA Awards -- Maddie & Tae are readying their next studio release that will feature their latest single “Woman You Got,” the playful “Life Ain’t Fair,” and more.

Newcomers Callista Clark and Sacha will accompany Maddie & Tae throughout the duration of the CMT tour. Clark was recently named as the only Country artist in BILLBOARD’s “21 under 21” list and at just 18 years old she is making waves at Country radio with her debut single “It’s ‘Cause I Am.” Rising Canadian singer-songwriter Sacha was inducted into CMT’s prestigious Next Women of Country in 2021 and continues to build buzz on both sides of the border, most recently starting on the Gold certified TikTok hit “What The Truck” which amassed a record breaking 456,958 on-demand streams in its first week in Canada alone, and held strong as the most streamed domestic single for 14 consecutive weeks.

“We are so excited to have CMT’s Next Women of Country tour back on the road and to announce our favorite dynamic duo Maddie & Tae as headliners!” shared Leslie Fram, SVP of Music & Talent, CMT.  “I’ve loved having the opportunity to watch their careers soar since we first welcomed them into our program in 2015 and equally thrilled Callista and Sacha – two of our brightest newcomers – will have the opportunity to share the stage and be part of such an amazing tour.”

A staunch advocate for country music’s female artists, CMT launched its “Next Women of Country” campaign in 2013 in an effort to support and expose developing female talent, both signed and unsigned, in a male-dominated format. The campaign showcases emerging female artists across all CMT screens throughout the year, and in the six years since its launch, CMT has expanded the initiative to include six CMT NEXT WOMEN OF COUNTRY Tours, anchored by superstar acts including Jennifer Nettles, Martina McBride, Sara Evans, and most recently Tanya Tucker; a CMT.com digital series and more. Notable alumni of the franchise who have achieved both commercial and critical acclaim, include Kacey Musgraves, Kelsea Ballerini, Maren Morris, Mickey Guyton, Ashley McBryde and more.

About Maddie & Tae:
Award-winning duo Maddie & Tae are drawing praise for their No. 1 debuting The Way It Feels album with Rolling Stone saying the music is “anchored around their stellar vocal pairings and some of the tightest harmonies on Music Row.” Together as longtime friends and music collaborators, Maddie Font and Taylor Kerr co-wrote 14 of the album’s 15 tracks including the Double Platinum-certified No. 1 hit, “Die From A Broken Heart.” With “Die From A Broken Heart” topping the country airplay charts, Maddie & Tae became the first and only female twosome with multiple No. 1s. The pair co-wrote their latest single, “Woman You Got,” which hit the Country radio charts and is the first release from Maddie & Tae’s forthcoming project.

Maddie & Tae first broke out in 2013 with their brilliant counter to bro-country, the Platinum-selling smash, “Girl In A Country Song,” which took Country radio by storm, skyrocketing to the top of the charts and establishing them as only the third female duo in 70 years to top the Country Airplay charts. Nominated for Vocal Duo of the Year at the upcoming 55th CMA Awards, they have earned trophies from the Radio Disney Music Awards and CMA Awards, along with multiple ACM, Billboard, CMA and CMT Award nominations. Maddie & Tae have received widespread praise from Associated Press, Billboard, Entertainment Weekly, NPR, The Tennessean, The Washington Post, Glamour and others. The celebrated duo has toured with country music’s hottest stars including Carrie Underwood, Dierks Bentley, and Brad Paisley, and are currently on the road for The Weekends Tour with Brett Young. For additional information, visit www.maddieandtae.com.

Every song has a story and at just 18 years old Callista Clark has a lot to say. Like so many talented singer/songwriters that paved the way before her, the young songstress wields her creative gifts as both a defense and an instrument of peace as she puts her heart on display with her debut collection Real To Me, out now via Big Machine Records. Blending her love for authentic, timeless classics with the sounds of her Georgia roots, Clark “commands her career from its breakthrough beginnings” (American Songwriter). Gearing up for the release, she collaborated with many of Country music’s leading songwriters including Jonathan Singleton, Laura Veltz, Nicolle Galyon, and Emily Shackleton, among others. The proof that Clark can hold her own among Nashville’s most prominent is evident as she was recently named an iHeartCountry On The Verge Artist and her debut single, “It’s ‘Cause I Am” continues to climb as Country radio’s most successful new artist debut of 2021. She made her national television debut earlier this year with an interview and performance of the single on Live with Kelly & Ryan who touted her as “the next big thing in Country music.” Coming off of a whirlwind few months, she shows no signs of slowing down and was recently featured as the only Country artist in  BILLBOARD’s annual “21 Under 21” list. Her inspiring videos with which Scooter Braun (SB Projects) and Scott Borchetta (Big Machine Label Group) took notice, have amassed over 130 million views across all socials + YouTube. For more information and upcoming tour dates, visit CallistaClark.com and follow along with Callista’s journey on Facebook, Instagram, TikTok and Twitter.

About Sacha:Since the release of her EP ‘The Best Thing’ in July 2020, Sacha has been making a name for herself in Canada and the USA with her signature blend of traditional and pop-country. Her latest single, ‘Standards’, boasts over 1 million global streams, and resulted in her being featured as iHeart Radio’s ‘Future Star.’ Sacha was named one of CMT’s ‘Next Women of Country’ for 2021, and has been featured in major television, print and online press including CMT,  Music Row Magazine, American Songwriter, Rolling Stone Country, Billboard, and The Boot. Her latest record-breaking release, “What The Truck” (with The Reklaws) started out as a viral TikTok and was the most streamed domestic release in Canada for 14 straight weeks, as well as becoming the fastest domestic single ever to reach 1-million streams. For more, visit iamSacha.com and follow Sacha on Facebook, Instagram, Twitter, TikTok and YouTube.