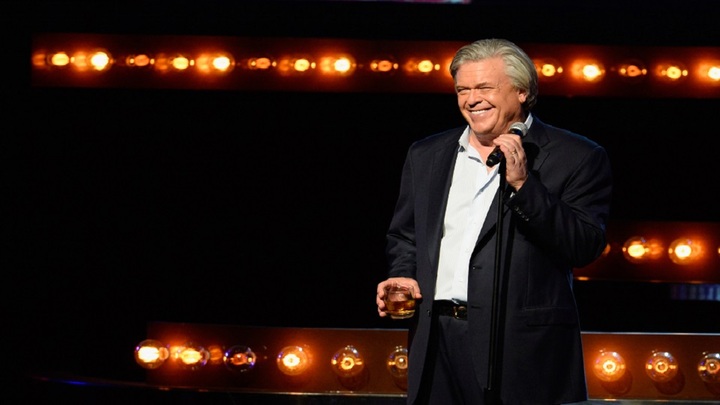 NASHVILLE– June 5, 2015 – America’s favorite scotch-drinking funnyman Ron White is ready to salute the troops with a night of comedy on CMT when his fifth-annual “Comedy Salute to the Troops 2015,” premieres Friday, June 12 at 9:30pm, ET/PT.  Taped earlier this year at the Mirage Hotel and Casino in Las Vegas, the 90-minute special features White and fellow comedians Shane Torres, Gene Pompa, Rocky LaPorte, Kathleen Madigan and Finesse Mitchell, as they raise funds for the Armed Forces Foundation, create awareness for PTSD, and give back to the men and women who have served their country.

No topic is off limits in this all-new special as White and his friends tackle a variety of subjects, ranging from the city of Las Vegas, to seat belts, to diet and exercise, and even how to deal with people who have bad breath.  White finales what he deems his “favorite night of the year” by discussing the underrated fear of geese, the laziness of his French bulldogs and his personal thoughts on standard police sobriety tests.

To date, Ron White and his wife, Margo Rey, have raised more than one million dollars for the AFF. The foundation’s mission is to protect and promote the physical, mental and emotional wellness of military service members, veterans and their families.

Ron White has been a passionate supporter of the US military troops for more than 20 years, donating his time and resources. White first rose to fame as the cigar-smoking, scotch-drinking funnyman from the Blue Collar Comedy Tour phenomenon, but now as a chart-topping Grammy-nominated comedian and a feature film actor, he has established himself as a star in his own right. All four of his comedy albums charted #1 on the BillboardTM Comedy Charts. He has sold over 14 million albums (solo and with the Blue Collar Comedy Tour), been nominated for three Grammys, and over the past nine years has been one of the top three grossing stand-up comedians on tour in America.  He is currently traveling the country, stopping at several casinos and theaters on his 2015 comedy tour. As an actor, White has had supporting roles in films including “Horrible Bosses”and “Sex and the City 2.” He is a co-Executive Producer of “Bridegroom,” a Linda Bloodworth –Thomason documentary, which debuted at the 2013 NYC Tribeca Film Festival and won the Audience Award.

For more information about the Armed Forces Foundation, visit www.ArmedForcesFoundation.org.

CMT, a unit of Viacom Inc. (NASDAQ: VIA, VIAB), is the leading television and digital authority on country music and entertainment, reaching more than 92 million homes in the U.S.  CMT, CMT.com and CMT Radio offer an unparalleled mix of music, news, live concerts and series and are the top resource for country music on demand. The network’s digital platforms include the 24-hour music channel, CMT Pure Country, CMT App, CMT Mobile and CMT VOD.