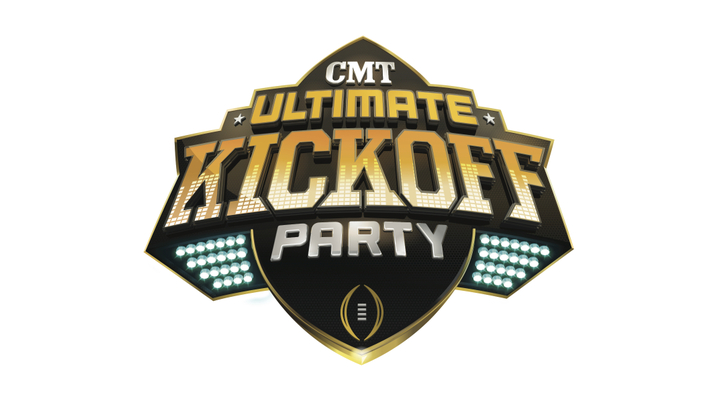 
NASHVILLE – December 17, 2014 – Football fans are gearing up for the College Football Playoff National Championship game next month and in celebration of the biggest weekend of the year for college football, CMT for the first time ever is going to be broadcasting the CMT ULTIMATE KICKOFF PARTY LIVE FROM THE COLLEGE FOOTBALL PLAYOFF NATIONAL CHAMPIONSHIP, a live television special premiering on CMT on Friday, January 9 at 9:00 p.m. ET. Just added to the lineup of star performers are Jake Owen, Maddie & Tae and Thomas Rhett. They join the previously announced Toby Keith, Lady Antebellum, Big & Rich and Brett Eldredge on the live 90-minute special, being broadcast from the Kay Bailey Hutchison Convention Center in Dallas, Texas. The concert special marks a first-time partnership with CMT and College Football Playoff and is the kickoff entertainment event at the national championship playoff weekend.

Jake Owen has ascended to stardom with five #1 smashes - the 2X PLATINUM anthem “Barefoot Blue Jean Night,” platinum-certified hits “Beachin’,” “Alone with You” and “Anywhere with You” along with the GOLD-certified “The One That Got Away.” Known for his thrilling performances and laid-back style of country, Owen showcases a much different side on his emotionally charged new single “What We Ain’t Got.” Fans, music critics and radio alike are embracing the talented singer’s fresh sound. Produced by Joey Moi, his latest album DAYS OF GOLD (RCA Nashville) is the follow up to the GOLD-certified, chart-topping BAREFOOT BLUE JEAN NIGHT, which has sold well over 5 million tracks to date. Previously taking home ACA and ACM Awards, the Vero Beach, FL, native has also earned GRAMMY and TEEN CHOICE Awards nominations. Just off the road from his major nationwide headline DAYS OF GOLD TOUR 2014, Owen will bring his signature show to Kenny Chesney’s 2015 THE BIG REVIVAL TOUR.

From his debut album IT GOES LIKES THIS (The Valory Music Co.), Thomas Rhett’s latest release “Make Me Wanna” is full of swagger and already Top 20-and-ascending at Country radio. The Georgia native first landed at the top of the Country charts with the PLATINUM-certified “It Goes Like This,” which had a three-week run on the Billboard Country Singles chart and tied the record Miranda Lambert set with "The House That Built Me.” His debut album also produced the PLATINUM-certified #1 smash “Get Me Some Of That,” as well as two Top 15 hits, “Beer With Jesus” and “Something To Do With My Hands.” Initially garnering attention as a gifted songwriter, Thomas Rhett’s credits include hits by Florida Georgia Line, Jason Aldean and Lee Brice. Thomas Rhett will hit the road next year with Florida Georgia Line on the ANYTHING GOES TOUR and has previously toured with Miranda Lambert, Justin Moore, Jason Aldean, Jake Owen and Brantley Gilbert. In addition to two recent nods for FOX’s first-ever American Country Countdown Awards, including the fan-voted Breakthrough Artist of the Year, Thomas Rhett has been nominated for ACM and CMA Awards. For tour dates and more visit, thomasrhett.com.

The fastest rising female act in eight years, Maddie & Tae shimmer, boldly introducing their Dot Records' debut single “Girl In A Country Song” with a #1 at Country radio and GOLD certification for sales exceeding 500,000 digital downloads. They are only the third new female duo to peak their debut single at #1 in the history of the Billboard Country Singles chart. The two songstresses penned all four songs on their self-titled EP, which debuted at #1 on Billboard’s New Artist Heatseekers chart. Revealing a gumption rarely seen in newcomers, they have earned praise from critics at NPR, Entertainment Weekly, The Washington Post and USA Today, as well as over 14 million VEVO views. Buzzfeed claims, “you can do anything you want, ladies” while Rolling Stone asserts, “no country single has been a hotter topic this year” and named the daring pair to its 10 New Artists You Need to Know. Maddie & Tae have made national television appearances on the “Late Show with David Letterman” and “Today,” where host Hoda Kotb dubbed them “the Darlings of Nashville.” The duo's Grand Ole Opry debut earned kudos from Opry member Brad Paisley and they were recently selected as one of CMT’s Next Women of Country. Get to know Maddie & Tae on Twitter @MaddieandTae or visit MaddieAndTae.com.

The inaugural College Football Playoff National Championship is on January 12, 2015, at AT&T Stadium in Arlington, Texas.

About the College Football Playoff
The College Football Playoff will begin with the 2014-15 season. The semifinals will match the No. 1 seed vs. No. 4, and No. 2 will face No. 3 in semifinal games that will rotate annually among the Chick-fil-A Peach Bowl, Goodyear Cotton Bowl, Capital One Orange Bowl, Allstate Sugar Bowl, Rose Bowl Game presented by Northwestern Mutual and VIZIO Fiesta Bowl. The first semifinals will be January 1, 2015, at the Rose Bowl Game presented by Northwestern Mutual and Allstate Sugar Bowl. The first national championship game will be January 12, 2015, at AT&T Stadium in Arlington, Texas.

About CMT
CMT, a unit of Viacom Inc. (NASDAQ: VIA, VIAB), is the leading television and digital authority on country music and entertainment, reaching more than 92 million homes in the U.S. CMT, CMT.com and CMT Radio offer an unparalleled mix of music, news, live concerts and series and are the top resource for country music on demand. The network’s digital platforms include the 24-hour music channel, CMT Pure Country, CMT App, CMT Mobile and CMT VOD.