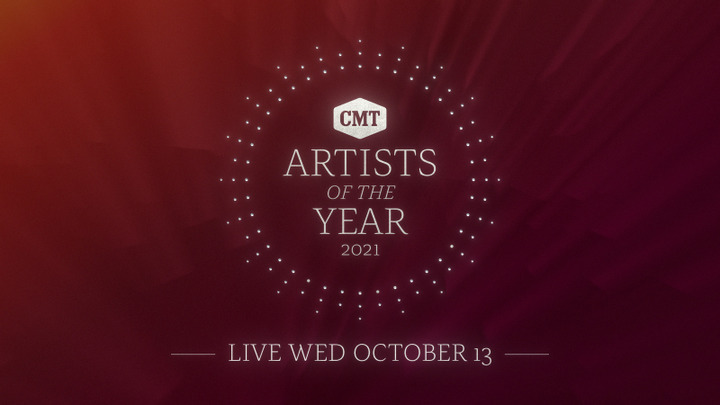 NASHVILLE - October 13, 2021 - Tonight, CMT recognized the year’s biggest acts in a heartfelt and unforgettable ceremony returned LIVE from Nashville’s Schermerhorn Symphony Center for the first time since 2019. The artists honored as this year’s 2021 “CMT Artists of the Year” were Chris Stapleton, Gabby Barrett, Kane Brown, Kelsea Ballerini and Luke Combs, alongside “Breakout Artist of the Year” Mickey Guyton and “Artist of a Lifetime” Randy Travis. This illustrious list of artists have cumulatively produced some 200 career top 10 singles, won 130 awards and have been streamed over 25 billion times.

Themes of perseverance and love of country music permeated the room as the honorees, special performers and special guests celebrated the opportunity to be together again after a year of adversity and loss. The evening kicked off with honoree Luke Combsperforming his hit, “Forever After All,” and accepting his award from friend Eric Church. Combs thanked the fans and his wife, and gave a special call out to Randy Travis for his enduring influence on the format.

Next, Gabby Barrett was lauded by Grammy award-winning Christian artist Michael W. Smith who introduced a moving performance of her No. 1 hit song, “The Good Ones,” backed by her husband and guitarist.

Presenter Misty Copeland introduced “Breakout Artist of the Year” Mickey Guyton who, alongside friend and musician, Yola, garnered the first standing ovation of the evening with a powerful world premiere version of Guyton’s song, “Remember Her Name.” The performance moved Guyton to tears, noting in her acceptance speech that “country music is really everyone’s music” and also giving a nod to her parents in the audience.

The evening’s second standing ovation came when Garth Brooks introduced friend and country legend Randy Travis with the highly-coveted “Artist of a Lifetime” Award. Travis and his wife Mary Davis joined Brooks onstage to accept the honor as Davis thanked the fans on Randy’s behalf noting, “Randy’s stroke may have taken his voice, but didn’t take the man or the heart, and it didn’t take the music.”

Honoree Kane Brown was introduced by friend Nelly before taking the stage to honor Travis by singing one of his biggest hits, “Three Wooden Crosses.” In an emotional moment, Brown accepted his own 2021 honor, thanking the fans and remembering his bandmate and drummer who passed away in 2019, days before Brown’s first “Artists of the Year” distinction.

Next, Grammy Award-winning artists Boys II Men, joined by Pentatonix’s Kevin Olusola honored Chris Stapleton with a first-ever performance of his song, “Cold.” Stapleton admitted to being “humbled” by CMT’s honor and acknowledged being moved by all the “love in the room” as he accepted his award from friend Connie Britton.

The final honoree celebrated was Kelsea Ballerini whose husband, country artist Morgan Evans introduced her performance with tourmates Jonas Brothers. Performing “With a Little Help From My Friends” from their tour stop in Franklin, Tenn., Ballerini accepted her award from Nick Jonas, thanking fans for their support.

The evening concluded with Walker Hayes who got the audience on its feet as he performed his smash viral hit “Fancy Like,” a song recognized as one of the most memorable phenomenons this year.

The 2021 “CMT Artists of the Year” is executive produced by CMT’s Margaret Comeaux, Switched On Entertainment’s John Hamlin; Amy Lin Johnson serves as Co-Executive Producer. The Executives in Charge of Production are Jackie Barba and Heather D. Graffagnino. Leslie Fram is Executive in Charge of Talent; Shanna Strassberg is Talent Producer.