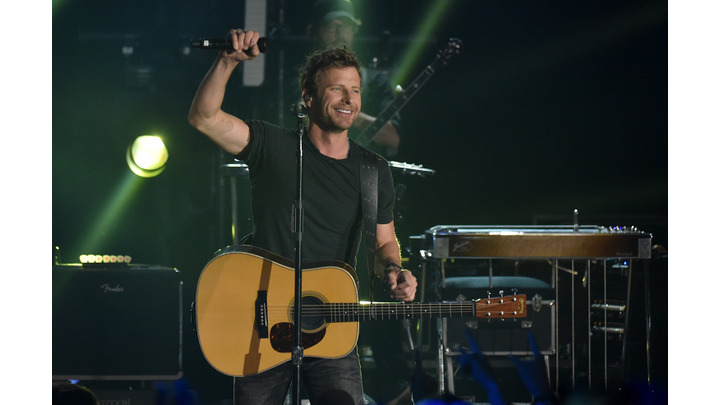 Leading into the Takeover Weekend, Dierks will dominate CMT and CMT Music video hours with double-shot videos from his catalogue of hits. In addition, CMT Radio highlights the superstar across all of its platforms with all-new interviews on “CMT After MidNite with Cody Alan,” “CMT Radio Live with Cody Alan” and “CMT All Access.”

CMT’s weekly, two-and-a-half hour series features special guest co-host Dierks Bentley alongside Cody Alan as they count down the 20 biggest music videos while bringing fans the hottest news stories. Get all the details on Dierks’ upcoming album, including what it was like working with artists such as Elle King and Maren Morris. Plus, Dierks reveals what it’s like having his kids out on the road with him, what he thinks about the Nashville Predators hockey team, and don’t miss as he plays “Yes You Can Openers,” a quiz about the hidden talents of his opening acts.

The one-hour special focuses on the excitement surrounding Dierks’ surprise concert in Knoxville last month at the University of Tennessee campus. Thousands of fans swarmed the stage as Bentley performed his Top 10 hit "Somewhere On A Beach," as well as two additional never-before-heard songs off his upcoming eighth studio album BLACK out May 27. The 14-song set also included the chart-topping singles “I Hold On,” “Free and Easy,” and “Drunk On A Plane.”

Dierks Bentley explores "the highs, the lows, the breakups, the makeups and all of the twists and turns that come with love” (Rolling Stone) as his eighth studio album BLACK is "unlike anything fans have heard from” (Entertainment Weekly) the multi-Platinum singer/songwriter.  Its GOLD lead single "Somewhere On A Beach" recently secured the No. One spot for two consecutive weeks on both the Billboard Country Airplay and Mediabase radio charts, becoming his 14th career chart-topper and fastest rising single of his career. While earning "superstardom he’s since taken to wholeheartedly” (Noisey) Bentley's seven previous studio albums have sold more than five million copies, notched 14 chart-topping singles, earned 13 GRAMMY nominations, CMA, ACM and CMT awards and membership at the Grand Ole Opry for more than a decade.  Bentley just set sail on his 40-city 2016 SOMEWHERE ON A BEACH TOUR, which has been dubbed this summer's "top must-see" (The Plain Dealer) show. For more information on the new album, upcoming appearances and tour dates, visit www.dierks.com.

CMT, a unit of Viacom Inc. (NASDAQ: VIA, VIAB), is the leading television and digital authority on country music and entertainment, reaching more than 92 million homes in the U.S.  CMT, CMT.com and CMT Radio offer an unparalleled mix of music, news, live concerts and series and are the top resource for country music on demand.  The network’s digital platforms include the 24-hour music channel, CMT Pure Country, CMT Mobile and CMT VOD.