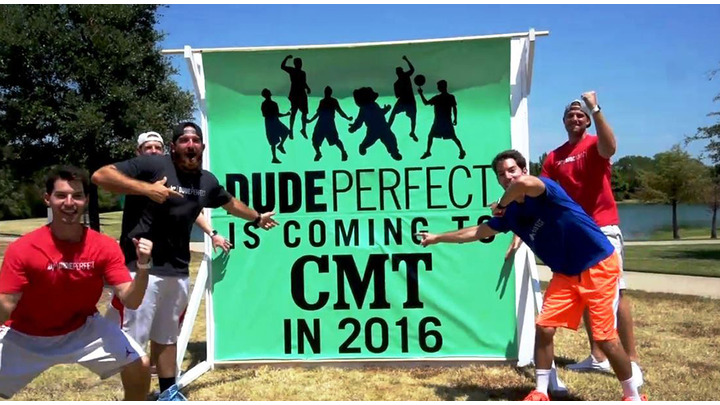 September 3, 2015 – CMT today announced the pick-up of “ The Dude Perfect Show” (working title) from Rob Dyrdek’s Superjacket Productions, slated to premiere in 2016. The series will combine comedy and live-action stunts and follow the lives of digital stars Dude Perfect, comprised of 5 best friends and their beloved panda mascot, as they dream up their next viral video, work with celebrity guests, prep performances and meet fans at live events, or create hilarity in their headquarters in Dallas, Texas. Dude Perfect announced the forthcoming series in a video message via their various social channels (including YouTube, Facebook, Twitter, Instagram and Snapchat ) in which a trick shot released a banner revealing the message “Dude Perfect Coming to CMT in 2016.”

“We are super excited to be working with Superjacket and CMT on the series. We have fans from all over the world constantly asking us for more visibility into the daily lives of Dude Perfect and how we get to work with these amazing athletes, entertainers and iconic sports venues.  This show will regularly take fun to the next level and allow the viewers to virtually join us and be part of our incredible journeys,” said Dude Perfect.

"Way beyond the insane trick shots, these guys are truly an All-American brotherhood that turned a passion into an amazing business. This show will give their fans and the world an inside look at their camaraderie and the fun they have behind the viral hits they produce," said executive producer Rob Dyrdek.

With more than 23 million fans and followers, 1 billion online video views, and the #1 Sports Channel on YouTube, Dude Perfect attracts fans from around the globe. In their first-ever TV series, the dudes: Tyler Toney, Cody Jones, Garrett Hilbert and twins Coby and Cory Cotton, will open the doors to their mancave in Dallas, Texas to showcase exactly how they cook up their next crazy idea. Part comedy and part live-action, the series will showcase the guys’ “Go-Big” mantra in their unique world of sports stunts, crazy fun interactions with some of the world’s biggest athletes and celebs, and their all-out hilarious friendship that has made the Dude Perfect guys so beloved by all ages.