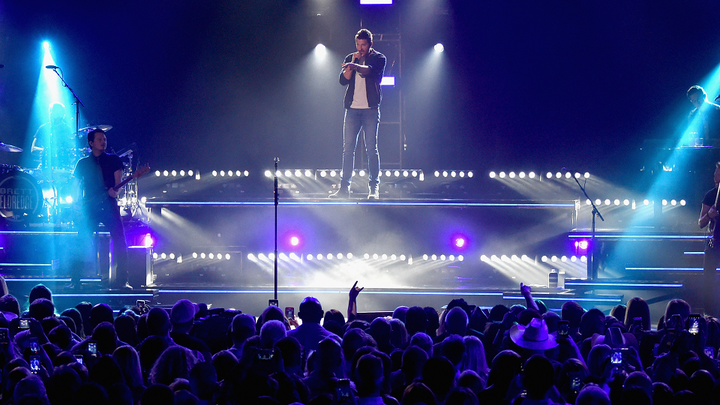 NASHVILLE – June 13, 2017 – CMT and country star Brett Eldredge recently pulled off an epic surprise show for fans in Las Vegas as part of the latest installment of “CMT Instant Jam” premiering Friday, June 16 at 10pm ET/PT. Filmed at The Chelsea at The Cosmopolitan of Las Vegas, the one-hour show features rocking performances from Eldredge and a behind-the-scenes look at how the entire pop-up show came together.

A few days before the concert, Eldredge took to his heavily-followed social platforms to begin sharing news about “Instant Jam” directly with his fans, first announcing that one was in the works, and then revealing that his surprise show would happen in Las Vegas. On the morning of the show, fans were directed to Topgolf, where lines formed quickly in hopes of securing a free ticket to the exclusive event. That night, fans filled The Chelsea theater with energy and excitement, jamming out with Eldredge to songs including his #1 hits “Beat of the Music,” “Mean To Me,” and “Don’t Ya,” along with new songs “Something I’m Good At” and “Superhero,” from his upcoming self-titled third album, due out August 4.

For an embeddable performance of “Something I’m Good At” from “Instant Jam” click HERE. For downloadable photos from “CMT Instant Jam: Brett Eldredge” click HERE.

Each episode of “Instant Jam” features live performances and captures all the excitement and energy as artists reveal to fans how to score tickets to an exclusive show in their area, while giving a behind-the-scenes look at the hours leading up to their concert. Previous “Instant Jam’s” have included Kenny Chesney, Carrie Underwood, Florida Georgia Line, Darius Rucker, Hunter Hayes and Dierks Bentley.