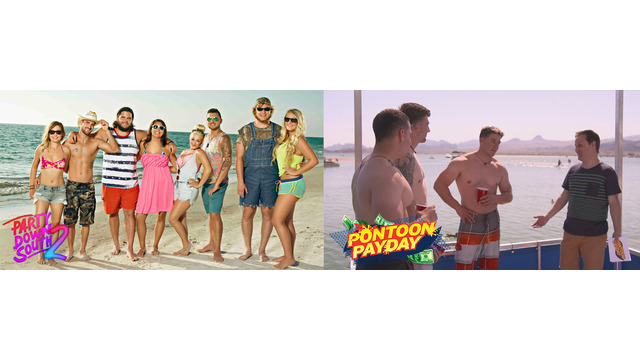 CMT IS TURNING UP THE HEAT AND KICKING OFF SUMMER WITH AN EPIC NEW SEASON OF “PARTY DOWN SOUTH 2” AND A BRAND NEW SERIES “PONTOON PAYDAY,” THE FIRST-EVER GAME SHOW ON A BOAT

NASHVILLE – April 29, 2015 – CMT is kicking off summer a little early with a wet and wild season premiere of the smash hit series “Party Down South 2,” along with the premiere of “Pontoon Payday,” the first-ever game show on a boat where contestants can either get drenched in cash or just plain drenched. Both series, from the masterminds behind the “Jersey Shore,” 495 Productions, bow on Thursday, May 14 with “Party Down South 2” at 9pm ET/PT and double shots of “Pontoon Payday” at 10pm ET/PT.

After surviving a drama-filled first season, the cast of “Party Down South 2” (Bradley, Duke, Hunter, Tommy, Ashton, Karynda and Raven) are back for an unforgettable second season where they’ll take over St. Petersburg, Fla. and welcome a feisty new roommate, Kelsie, into the mix. “Party Down South 2” is one of the most popular original series in CMT history. The first season averaged 3.2 million weekly viewers and garnered substantial buzz across social platforms by reaching nearly five million fans each week.

CMT is setting sail with “Pontoon Payday,” the first-ever game show on a boat. Throughout the half-hour series, unsuspecting lake-goers are plucked from their party boats to suddenly find themselves competing on a floating game show hosted by comedian Frank Nicotero. If they can answer a few questions correctly, they’ll win quick cash to keep their party afloat. But get the questions wrong, and they’re tossed overboard with only their pride.

CMT wrapped its most recent quarter on a high note, posting A18-49 gains in both Primetime (+32%) and Total Day (+8%) over the previous quarter.