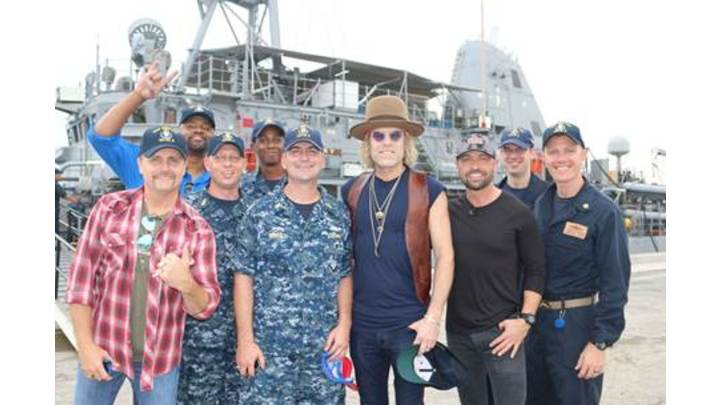 NASHVILLE – December 13, 2016 – “CMT Hot 20 Countdown” made network history recently when the show completed its first-ever trip overseas to a military base in Bahrain to tape two special holiday episodes that will air at the end of the year. “Hot 20 Video of the Year Countdown” premieres Saturday, December 17 at 9 AM, ET/PT followed by “Hot 20 Holiday Salute” on Saturday, December 24 at 9 AM, ET/PT.

“This was ‘Hot 20’s’ most ambitious production to date and being able to bring the troops a little closer to their families was a no-brainer for us,” said Quinn Brown, CMT executive producer. “Our military deserves special recognition any time of the year, but for the holiday season it’s particularly important to bring some joy to those overseas. Big & Rich did just that – what a phenomenal concert they put on for the thousands at the base. It was an absolute honor to be invited to NSA Bahrain and to be amongst so many brave and talented people.”

“This was a unique experience for us. It’s the first time that Armed Forces Entertainment has sent a tour to any of our locations that included a cable network's camera crew,” said Major Jody Wynans, Chief of Armed Forces Entertainment (AFE). “The holidays typically represent a time when families get together, so to be able to provide our deployed service members with a little piece of home in the form of quality entertainment and hopefully cheer them up while they’re missing their loved ones, is what AFE is all about.”

"It is sure an inspiring experience to get an up-close look at our US Naval base in Bahrain, which is host and home to a very large multi-national coalition force working to support operations and providing stability and peace in the region,” said Big & Rich’s Big Kenny. “The focus, discipline, knowledge and integrity that we witnessed of the security forces and command there is superb. I can say with great pride and assurance that our nation is represented well on the front lines of freedom by the men and women of the US military. It was an absolute honor and a blast to play some country music for all the folks there and say thank you on behalf of all of us back home in the USA. We are blessed beyond belief."

Premieres for “Hot 20’” specials from Bahrain include:

“Hot 20” thanks our men and women serving overseas in the first installment from their trip to NSA Bahrain. For the first time on national television country superstars Big & Rich debut a new song, “For the Party,” in front of a small group of Sailors at guard mount, where they prepare for a 12-hour shift protecting the base. Later, the guys deliver a full concert to thousands of service members on base including a performance of their hit “Comin’ To Your City,” and one lucky individual has the opportunity to join the guys on stage. Cody Alan tests his physical strength and endurance when he joins four branches of the armed forces for their early morning training, including pushing a firetruck, flipping tires and more. Alan also sits down with an NSA Bahrain Commanding Officer to discuss the importance of the base in that region, as well as what has surprised him about living in Bahrain.

Military personnel from the Army, Navy, Marine Corps and Coast Guard command this special episode as they request music videos and send personalized video messages dedicated to their family and friends back in the United States. From Toby Keith’s “American Soldier,” to Reba’s “Fancy” and Florida Georgia Line’s “H.O.L.Y.,” the video requests span a catalogue of country’s biggest hits.

In addition to “Hot 20” Cody Alan also highlights the trip to Bahrain on “CMT After MidNite,” with all-new interviews from Big & Rich and more airing the night before each “Hot 20” premiere (12/16 and 12/23). "CMT After MidNite" airs from midnight – 6 a.m., ET, reaches nearly two million weekly listeners on more than 200 radio stations and is available on iHeartRadio. For more information, visit www.cmtcody.com.

About Big & Rich
Big & Rich is comprised of Big Kenny and NBC’s “The Celebrity Apprentice” winner John Rich. The multi-platinum hit duo have garnered multiple Grammy, ACM, CMA and CMT Music Award nominations. The first single, “Look At You,” from their latest studio album, Gravity, smashed into the top 10 on the Country chart. The follow-up single, "Run Away With You," kept the momentum rolling, also hitting the top 10, while the latest single, “Lovin’ Lately” featuring Tim McGraw also just scored top 10 on the country charts. The Country superstars’ first studio album, Horse of a Different Color, includes their hit infectious single, “Save a Horse (Ride a Cowboy).” Other hits include “Comin’ to Your City,” “8th of November” and their No. 1 hit, “Lost in this Moment.” Meanwhile, “Comin’ to Your City” is nearing a decade as the theme song for ESPN’s “College GameDay.