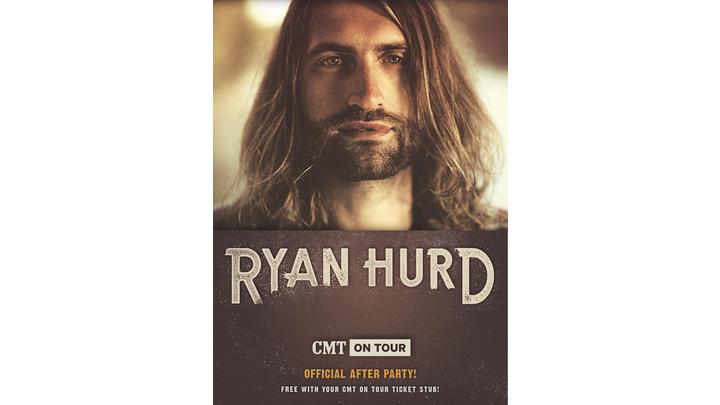 NASHVILLE – October 29, 2015 – CMT On Tour is expanding its fall lineup with the addition of newcomer Ryan Hurd to the bill, who co-wrote the CMA-nominated No. 1 single “Lonely Tonight,” recorded by Blake Shelton and Ashley Monroe. Hurd kicks off the first-ever “CMT On Tour Official After Party” this weekend in Maryland, followed by shows in thirteen additional markets. The announcement comes just as the highly-anticipated tour is set to launch its first show in New York City tonight with headliners Brett Eldredge and Thomas Rhett and special guest Danielle Bradbery. Additionally, CMT will world premiere Hurd’s first music for “Good As You Think I Am” TODAY on CMT.com and across all platforms on Friday, October 30. The video can be viewed on CMT and the network’s 24/7 digital music channel, CMT Pure, as well as CMT’s digital platforms including CMT.com and the CMT Artists App.

“Ryan is already established in Nashville as a talented, emerging singer/songwriter,” said Leslie Fram, SVP of Music Strategy and Talent, CMT. “Now, CMT is excited to introduce Ryan Hurd the artist! We’re thrilled to share his music, and can’t wait for fans to meet him in-person on the road with us this fall.”

Admission to the Official CMT On Tour After Party is free to anyone with a CMT On Tour ticket. Hurd is set to perform in the following cities:

In addition, Hurd will release tomorrow a four-song EP entitled Panorama via streaming partners and on his website, ryanhurdmusic.com.

ABOUT RYAN HURD: Country newcomer Ryan Hurd has written songs that have been recorded by Blake Shelton, Tim McGraw, Jake Owen, Rascal Flatts, Randy Houser, Darius Rucker, The Cadillac Three, Brothers Osborne and the Swon Brothers. He recently celebrated his first No. 1 single as a songwriter with the CMA-nominated duet “Lonely Tonight,” recorded by Blake Shelton and Ashley Monroe. Now, the Kalamazoo, MI native is lending his own voice to the songs he writes and taking them on the road. “Songwriting will always be a huge part of who I am,” says Hurd. “I am excited to follow the full life of the songs I’ve written. I’m ready to perform and connect with people out on the road and grow as an artist.”