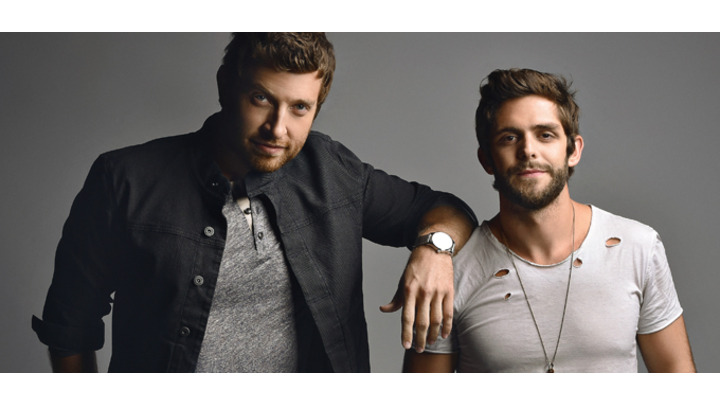 NASHVILLE – August 31, 2015 – In the tradition of the annual CMT On Tour, Brett Eldredge and Thomas Rhett intend to deliver a set that surprises fans and leaves no one in their seat when “CMT On Tour: Brett Eldredge & Thomas Rhett – Suits & Boots” kicks off this fall. The headliners revealed the list of cities and dates for the 14th annual fall tour today, which officially kicks off October 29 in New York City. Rounding out the tour as special guest and the only female is Danielle Bradbery, season four winner of The Voice.

Fans can expect a high-octane set from the pair as Eldredge and Thomas Rhett both have a lot to celebrate. CMT on Tour is the first headlining tour for Eldredge and Thomas Rhett, and the pair currently dominates two of the coveted Top 10 spots on the country charts. The guys are also each set to launch sophomore albums this fall—Eldredge will release Illinois September 11, while Thomas Rhett’s Tangled Up is out September 25. The guys discuss potential names for the upcoming tour in a fun clip released today at CMT.com:

“Thomas Rhett and Brett are well on their way to becoming the superstars of our format. As they both celebrate back-to-back No. 1 singles, we’re beyond excited to have them co-headline the CMT Tour this year,” said Leslie Fram, SVP of Music Strategy, CMT. “On top of that, it’s an honor to celebrate and support Danielle Bradbery as one of CMT’s Next Women of Country.”

The first on sale date for CMT on Tour is scheduled for September 11. For more information as it becomes available, visit cmtontour.cmt.com and join the conversation on social using #CMTonTour. The full list of tour dates and cities follows.

**More dates/markets to be announced.

CMA New Artist of the Year and ACCA Song of the Year winner Brett Eldredge is enjoying three consecutive No. 1 hits with the PLATINUM-certified “Don’t Ya,” GOLD-certified “Beat of the Music,” which was the most played country song of 2014, and, the GOLD-certified “Mean To Me.” His current single, “Lose My Mind,” is Top 10 on the singles charts and was recently named USA Today’s Song of the Week. It’s the first single from his forthcoming new album, Illinois, which will be released Sept 11. An award winning songwriter, Eldredge wrote all but one song on his debut album and every song on his forthcoming Illinois, which he also co-produced. Known for his dynamic performance style, he has played before millions of fans on superstar tours including Taylor Swift’s The RED Tour and Keith Urban’s Fuse Tour. Eldredge is on tour with fellow CMA Award winner Darius Rucker for the Southern Style Tour. For tour dates and more, visit bretteldredge.com, or follow him on Facebook Twitter and Snapchat.

PLATINUM-selling Thomas Rhett leads the pack as one of country music’s elite new artists with the fastest rising single of his career, the Top 5 GOLD certified upbeat breakup anthem “Crash And Burn” from his upcoming sophomore release TANGLED UP out Sept. 25 (The Valory Music Co.). As "one of country music's most successful – and divisive – new artists" (The Guardian), the new music follows his debut album IT GOES LIKE THIS, which spawned three consecutive No. one hits, making him Billboard’s first male country artist to do so from a debut album in over two decades. The CMA and ACM “New Artist of the Year” nominee initially garnered attention as a gifted songwriter with credits including hits by Florida Georgia Line, Jason Aldean and Lee Brice. It is his “high-energy all the way” (El Paso Times) live show that has “the audience dancing all the way up in the rafters of the stadium” (Billboard) that continues to catch the attention of critics out on the road. For tour dates and more visit, thomasrhett.com.

Nineteen-year-old Danielle Bradbery is coming into her own: she moved to Nashville fulltime, dove into songwriting and connected with her fans in new and exciting ways. The petite powerhouse recently released “Friend Zone” (Big Machine Records) after previewing the song during performances this summer. The sassy tune serves as a follow-up to her self-titled debut album, which produced feel-good singles “Heart of Dixie” and “Young In America,” the first of which landed in the Top 15 at Country radio. The project also included “My Day,” which was featured in NBC’s 2014 Sochi Winter Olympics campaign. Last fall, Danielle let fans choose acoustic cover songs for her to sing as part of the DB Request Live video series, which elicited kudos from some of the original artists like Colbie Caillat, A Great Big World and Christina Perri. The season 4 winner of The Voice has toured with superstars Brad Paisley, Miranda Lambert and Hunter Hayes in addition to surprise appearances during coach Blake Shelton’s shows. Danielle has appeared on the CW’s Hart of Dixie, KATIE and ABC’s The View. Honored as a one of CMT’s Next Women of Country, the Texas native will join CMT ON TOUR: Brett Eldredge & Thomas Rhett – Suits & Boots. For tour dates and more, visit DanielleBradbery.com or follow Danielle on Instagram.