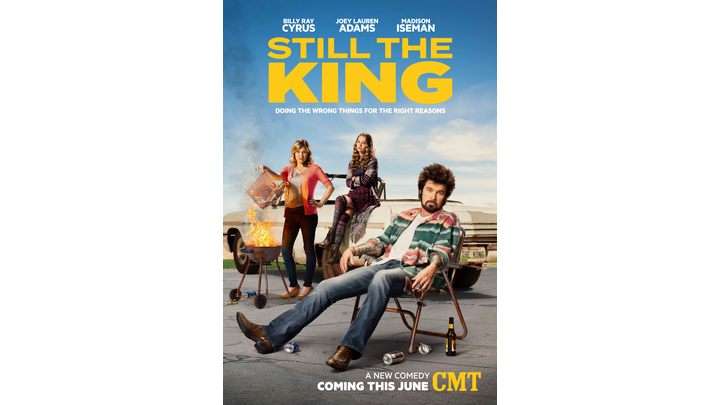 CMT TO DEBUT FIRST-LOOK AT “STILL THE KING” STARRING BILLY RAY CYRUS AND JOEY LAUREN ADAMS DURING THE SERIES FINALE OF “PARTY DOWN SOUTH” ON THURSDAY, APRIL 7TH AT 9PM ET/PT

NASHVILLE - April 5, 2016 – CMT today announced that fans will get an exclusive “first look” at the highly anticipated forthcoming scripted comedy “Still The King” when a special two-minute introductory piece to the series premieres during the finale of “Party Down South,” Thursday, April 7 at 9pm ET/PT. Starring Billy Ray Cyrus and Joey Lauren Adams, “Still The King” premieres Sunday, June 12 at 9pm ET/PT.

“Still The King” features Cyrus as Vernon Brown, AKA “Burnin’ Vernon," a scandal-ridden washed up one-hit wonder who is kicked out of country music, only to emerge 20 years later as the second best Elvis impersonator. After crashing into an old country church outside of Nashville during a drunken bender, he is sentenced to return and perform community service. Along the way, he pretends to be the congregation’s new minister and discovers he has a 15-year-old daughter he’s never met. In addition to Cyrus and Adams, “Still The King” stars Madison Iseman (“Laid in America” and Nickelodeon’s “Henry Danger”) Lacey Chabert(“Mean Girls” and “Party of Five”), Leslie David Baker (“The Office”), Kevin Farley (“Eight Crazy Nights” and “The Waterboy”), Travis Nicholson and Jon Sewell.

The first look at the much-anticipated series follows the announcement that CMT is doubling its original programming and now focused on four distinct lanes of programming: music, unscripted, documentaries and scripted. CMT’s original series are fueling consistent growth for the brand with premieres for the quarter up nearly 10% from a year ago.*

After five seasons of crazy vacations and too many hangovers to count, the beloved “Party Down South” cast says farewell to Savannah and to each other on this week’s series finale. Following the finale at 10pm ET/PT, the cast reunites for “Party Down South: The Final Funnel,” where they’ll take a special look back on their vacations and relive the biggest fights, best hook-ups and craziest nights out on the town.