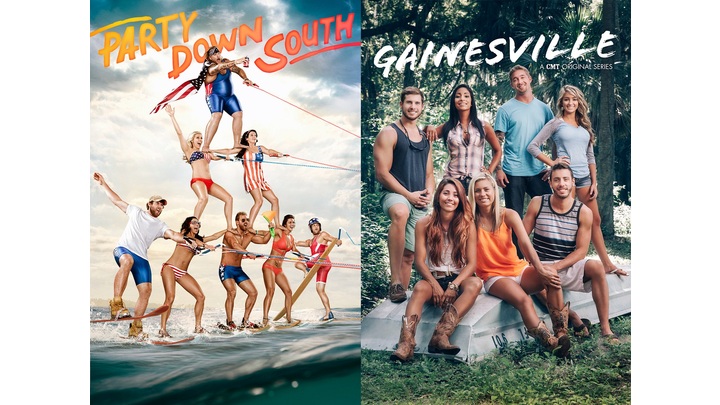 NASHVILLE – July 16, 2015 – From partying down to growing up, CMT today announced a new night of original programming spotlighting two very different groups of Millennials as they navigate the highs and the lows of adulthood. CMT’s top-rated series “Party Down South” returns for its wildest season yet on Thursday, August 20 at 9:00 p.m.ET/PT, immediately followed by the series premiere of the coming-of-age docu-series “Gainesville” at 10:00 p.m. ET/PT. “Gainesville” picks up where “Party Down South” ends and highlights the next phase of life as a group of seven young friends transition into adulthood by banding together to face a broad range of issues, including paying for college and moving out of their parents’ house.

The evening kicks off with the original “Party Down South” cast – Daddy, Lyle, Murray, Walt, Hannah “Hott Dogg,” Lauren, Mattie and Tiffany – as they reunite in St. Petersburg, Fla. for a 10-episode season filled with adventure, partying and of course, drama. Season four opens with one of the most heated fights in the show's history when Tiffany literally goes head-to-head with Hannah over her new boyfriend. In between the explosive fights and blooming relationships, an old flame comes into the picture resulting in a life-changing event for Lyle. Meanwhile, Walt and Murray find themselves hitting it off with the women of St. Pete, and “Martha” decides to crash her own birthday party. “Party Down South” remains CMT’s most social show, and season three ranks as the network’s highest rated and most buzzworthy original series this year, bringing in nearly 3 million total weekly viewers across all platforms and generating two million impressions on Twitter.

“Gainesville” is a heartwarmingly honest depiction of seven young friends facing life on their own for the very first time. Life is a far cry from one big party for the tight group, as Andreya, Austin, Beth, Brian, Kenny, Kerryn and Shelby struggle to find their place in life. In each of the 10 half-hour episodes, the young friends will fight their way through devastating breakups, complex relationships and financial challenges facing most millennials today. One of Florida’s most renowned college towns, Gainesville is just their hometown. CMT will premiere back-to-back episodes of the new series on Thursday, August 20 at 10:00 and 10:30 p.m. ET/PT.

CMT concluded its most recent quarter up nearly +10% among W18-49 in Primetime over the previous quarter.

For more on “Gainesville,” visit CMT.com, the CMT app and join the conversation on Facebook and Twitter using #Gainesville.

CMT, a unit of Viacom Inc. (NASDAQ: VIA, VIAB), is the leading television and digital authority on country music and entertainment, reaching more than 92 million homes in the U.S.  CMT, CMT.com and CMTRadio offer an unparalleled mix of music, news, live concerts and series and are the top resource for country music on demand. The network’s digital platforms include the 24-hour music channel, CMT Pure Country, CMT App, CMT Mobile and CMT VOD.