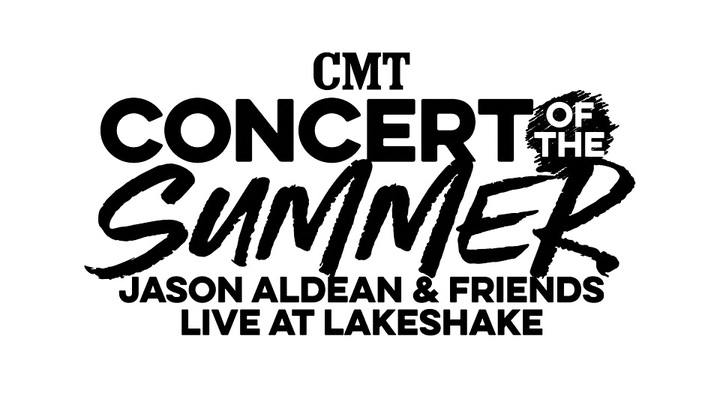 NASHVILLE – May 11, 2016 – From the masterminds behind the ground-breaking music series “Crossroads” and the inventive “CMT Music Awards,” the first award show that turned the power over to the fans to choose the winners, comes the first-ever “CMT Concert of the Summer,” an immersive documentation that will bring fans directly into the summer’s biggest concert event, Jason Aldean’s SIX STRING CIRCUS TOUR, through their screen of choice.

The colossal two-hour music extravaganza premiering this summer features ACM Entertainer of the Year Jason Aldean along with superstars Thomas Rhett and A Thousand Horses, as well as surprise guests as they take the stage at Live Nation’s Country LakeShakein Chicago, Illinois.

The inaugural event aims to amplify the concert going experience with exclusive on-the-scene and behind-the-scenes access including capturing artists pre-show rituals, the adrenaline fueled moment as they anxiously await to take the stage, as well as post-show thoughts from the unique POV of both the artists and the fans. Each year, CMT will proclaim one festival or event as the year’s concert of the summer and then bring it to life across all screens (television, online and social).

“It’s always cool when you’re approached about new ways to get music to your fans,” said Aldean. “So when CMT asked about coming out to LakeShake, I was immediately into it. We’re going to slap an all-access pass on them for the day and play until they pull the plug."

“Summer festivals live large in the culture. Fans from all walks of life make pilgrimages to celebrate the power of music,” said Brian Philips, President of CMT. “With our Concert of the Summer event, we are going to capture the definitive documentary and companion programming for this big show. We’re counting on powerhouses Jason Aldean, Thomas Rhett and A Thousand Horses to rock the masses. Viewers will experience the party through the eyes of both artists and fans."

The coveted ACM Triple Crown winner "has flipped the switch" with his "muscular new single" (Rolling Stone) "Lights Come On," as it taps into the universal connection he shares with fans every night on tour. As the lead single from his upcoming seventh studio album, "the hard-charging up-tempo tune” (The Tennessean) immediately reached the No. One spot on Billboard's Country Digital Songs chart upon release. The new music follows 16 career chart-toppers, while each album released has earned PLATINUM status or better tallying more than 10 million album sales. This year’s ACM "Entertainer of the Year" Jason Aldean returns to the road as his SIX STRING CIRCUS TOUR launches May 19th in Rogers, AR. For more information and for a full list of upcoming tour dates, visit www.jasonaldean.com.

ACM winner Thomas Rhett continues to prove he’s a "package deal" (CBS This Morning), earning five consecutive No. ones at country radio, including two back-to-back PLATINUM chart-toppers off his sophomore release TANGLED UP (The Valory Music Co.). “T-Shirt,” the followup to his record-breaking ACM Single Record of the Year “Die A Happy Man,” "offers plenty of unapologetic fun" (Rolling Stone) and is currently flying up the Top 10. After recently wrapping his first oversees run, the singer/songwriter will continue to prove he has gone "from a promised next big thing to actually being it” (Noisey) as direct support for Jason Aldean’s SIX STRING CIRCUS TOUR before heading to the Billboard Music Awards where he’s nominated for "Top Country Song.” For more information and for a full list of upcoming tour dates, visit www.thomasrhett.com.

A Thousand Horses is a fresh fusion of classic sounds – a hybrid of Lynyrd Skynyrd, the Allman Brothers, Black Crowes and Exile on Main Street-era Rolling Stones - wrapped up in a modern-country context. Their first single“Smoke” went to #1 on both the Mediabase and Billboard Country Airplay Charts after making Country Aircheck history as the highest debut for a new artist’s first single. They also became the first band (with at least three members) to send a debut single to #1 on Billboard Country Airplay Chart this decade. With Michael Hobby leading vocals, Bill Satcher and Zach Brown on guitar and Graham Deloach on bass, the band initially gained momentum playing clubs across the South. Rolling Stone Countryhailed the foursome as the Best Up-and-Comer at 2014’s Austin City Limits and USA Todaynamed them one of 2015’s Artists to Watch and an On the Verge Artist. Their first album on the Big Machine Label Group, Southernality, is now available oniTunes and the current single from the album, “Southernality” is climbing the charts. The band was recently nominated for a pair of ACC Awards including Group/Duo of the Year, an ACM Award for New Vocal Group of the Year and a CMT Music Award for Group Video of the Year for their hit single “Smoke.” A Thousand Horses are currently on the road with Jason Aldean’s WE WERE HERE TOUR and have also toured with Darius Rucker. For more information and tour dates, visit AThousandHorses.com.

CMT Concert of the Summer