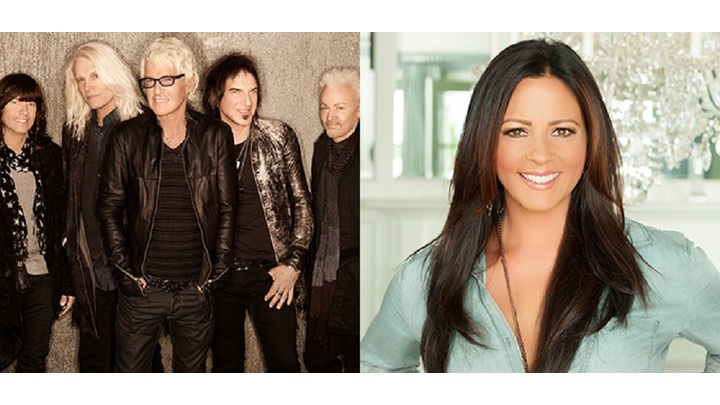 NASHVILLE – August 13, 2015 – CMT CROSSROADS is back with two new artists for a night of collaboration like no other. Chart-topping rock band REO Speedwagon and country singer/songwriter Sara Evans are the latest musicians to be paired together for an all-new episode of CMT’s flagship music series. Evans returns to the CROSSROADS stage for the third time, teaming up with the popular ‘80s band in Franklin, TN for CMT CROSSROADS: REO SPEEDWAGON AND SARA EVANS which premieres on Saturday, September 19 at 10 pm ET/PT.

"We met Sara Evans when REO played with Brad Paisley at the Sony Music Nashville annual cruise and we all became fast friends,” said REO Speedwagon’s Kevin Cronin. “When we got the offer to do 'CMT Crossroads' with her we jumped at the chance to hear Sara's sweet voice on our songs, and to put our spin on hers. Sara put me at ease right away and her energy is contagious."

“I’ve been a huge fan of REO Speedwagon for as long as I can remember,” said Sara Evans. “Their songs have been a part of the soundtrack of my life and I’m thrilled to be joining them on stage for ‘CMT Crossroads.’ It truly is a dream come true!"

Formed in 1967, signed in 1971, and fronted by Kevin Cronin since 1972, REO Speedwagon has rocked to the top of the charts with a RIAA-certified 22 million albums sold in the U.S., 40 million around the globe, and a string of gold and platinum records.  The group’s nine-times certified platinum Hi Infidelity spent 15 weeks in the No. 1 slot. Thirty–plus years later, Cronin and bandmates Bruce Hall (bass), Neal Doughty (keyboards), Dave Amato (lead guitar) and Bryan Hitt (drums) are on tour now, and still electrifying concert audiences worldwide.

Multi-platinum selling country singer and songwriter, Sara Evans has been called “one of the most compelling vocalists of her generation.” Evans is enjoying a prolific recording career with the release of her critically acclaimed seventh studio album Slow Me Down, which debuted at No. 2 on the Billboard Top Country Albums Chart. She collaborated with Country legend Vince Gill, Isaac Slade from The Fray and Gavin DeGraw on Slow Me Down, which is being dubbed as her best album to date and serves as a reminder of why she has had a level of success reserved for few. Evans is best known for hits including “Suds In The Bucket, “A Real Fine Place To Start,” “Born To Fly,” “A Little Bit Stronger,” and “No Place That Far.” She’s had five No. 1 songs, two No. 1 Country albums, sold over six million albums, and has been nominated and/or won nearly 10 major music awards. Evans is currently on tour across the country.