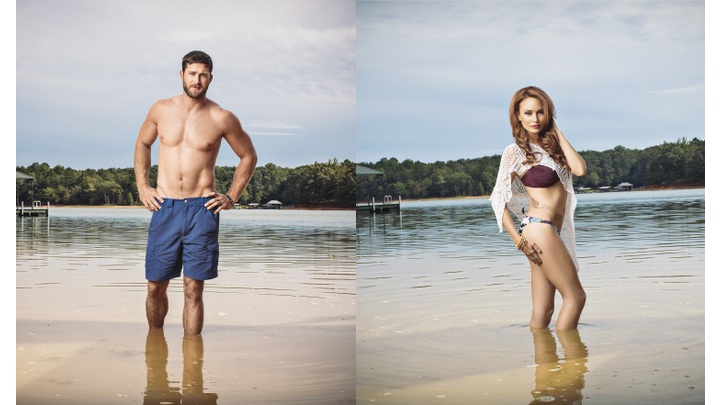 NASHVILLE – March 31, 2016 – Season five of CMT’s long-running competition series “Redneck Island” concluded its special “Battle At The Lake” edition with hosts Steve Austin and Melissa Rycroft congratulating teammates Riley Green and Becky Andrews for winning the $100,000 cash prize. Riley, a Jacksonville, Ala. resident, and Becky, of Baton Rouge, La., were both members of the 12 returning fan-favorite veterans from last season that faced off against 12 new faces during an intense season of mind- and body-exhausting challenges, dreaded “Pit” face-offs and plenty of drama along the way.

Riley and Becky became the team to beat early on when they joined forces during episode two, ultimately beating two other teams, Jorden Estis (Oak Grove, Ala.) and Cody Davis (Elberta, Ala.), and Gary Arterburn (Bucksnort, Miss.) and Katie Milam (Pine Bluff, Ark.) in the final challenge. The last faceoff included swimming, kayaking, paddle boarding and a Jet Ski race across the lake, followed by a maze through the trees and a complicated puzzle.

Riley will use his winnings to help further his music career, while Becky had a more serious motivation - her sister who had been battling stage-four breast cancer for the past three years.

“The second that I put that last peg into the hole, I realized that was the very second that the entire journey I had been fighting for was over. We did it and I couldn't have made a better partner if I would have hand-crafted him myself. The first person that crossed my mind when I won was my big sister, Christine.  When I left for the show I knew her battle with cancer was severe and almost backed out, but she told me there was no way she was not letting me go back and finish what I started last season. I promised her I would win for her and for us. Unfortunately, my sister lost her battle with cancer 10 days after I got home, but I will never forget the sound in her voice and the look on her face when I got home and was able to share the news with her. She was so proud. Thanks to everyone for making this journey and experience something I will never forget for as long as I live,” said Becky Andrews of winning “Redneck Island: Battle at the Lake.”

“I felt like I didn't get to prove myself last season, leaving only after the second challenge, so getting to make it to the finale this season and winning means a lot. I was able to show what I'm made of and I had a great partner in Becky. I'm just as glad that she won as I am that I did. This money will help me with my music career along with the exposure of being on CMT, and overall it was an amazing experience,” said Riley Green of the win.

Clips and Photos from Season 5 of REDNECK ISLAND: BATTLE AT THE LAKE Now Available for Download here.

To view FULL EPISODES of Season 5 of REDNECK ISLAND: BATTLE AT THE LAKE click here.