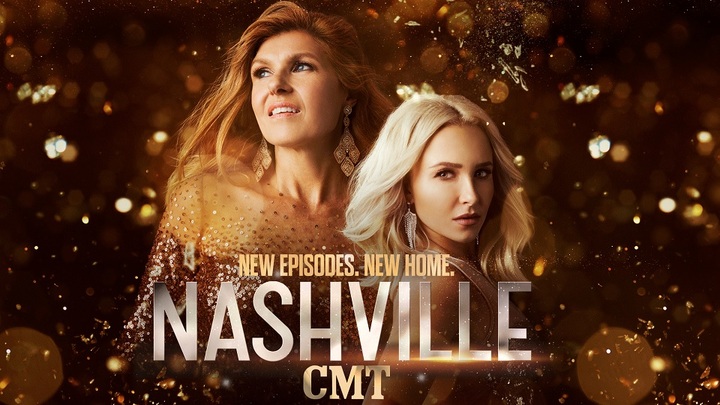 NASHVILLE – December 1, 2016 – Nashies set your DVRs now! As an early holiday gift for the fans, CMT today announced plans to sneak the first hour of the two-hour season premiere of “Nashville” on Thursday, December 15 at 9pm ET/PT. Additionally, CMT just dropped the trailer for the new season. Click here to view/embed/share. Produced by Lionsgate, ABC Studios and Opry Entertainment, the two-hour season premiere of “Nashville” will debut on Thursday, January 5 at 9pm ET/PT.

The season begins with Rayna and Deacon facing a new normal with Maddie now back home and Highway 65 struggling financially. The shocking news about Juliette creates a wave of emotions throughout Nashville and sets Rayna off on a journey of discovery.

“Nashville” is set against the backdrop of the city's music scene and follows Rayna Jaymes and Juliette Barnes. Both women face personal and professional challenges as they navigate their paths as artists and individuals. Surrounding them and often complicating their lives are their family, friends and, in some cases, lovers, as well as the up-and-coming performers and songwriters trying to get ahead in the business. Music City can mean so many things to different people. In "Nashville," musicians and songwriters are at the heart of the storm driven by their own ambitions. Some are fueled by their creativity and passion for fame. Others struggle to cope with the pressures of success and are doing everything in their power to stay on top.

Produced by Lionsgate, ABC Studios and Opry Entertainment, production is currently underway in Nashville. The series is executive produced by Marshall Herskovitz and Ed Zwick (the creators of “Thirtysomething”), Steve Buchanan and Callie Khouri. Jayson Dinsmore and Morgan Selzer executive produce for CMT.

The series airs in 225 territories worldwide. Since its debut, the show has inspired 10 soundtracks, including a Christmas album, which have collectively sold more than one million album units and over 5 million single-track downloads to date. It has also been nominated for multiple Emmy, Golden Globe and Critics Choice awards.

Lionsgate is a premier next generation global content leader with a diversified presence in motion picture production and distribution, television programming and syndication, home entertainment, international distribution and sales, branded channel platforms, interactive ventures and games, and location-based entertainment. The Company has nearly 80 television shows on 40 different networks spanning its primetime production, distribution and syndication businesses. These include the ground-breaking hit series Orange is the New Black, the fan favorite drama series Nashville, the syndication success The Wendy Williams Show, the hit drama series The Royals, the Golden Globe-nominated dramedy Casual and the breakout success Greenleaf.

Lionsgate's home entertainment business is an industry leader in box office-to-DVD and box office-to-VOD revenue conversion rates. Lionsgate handles a prestigious and prolific library of approximately 16,000 motion picture and television titles that is an important source of recurring revenue and serves as a foundation for the growth of the Company's core businesses. The Lionsgate and Summit brands remain synonymous with original, daring, quality entertainment in markets around the world. www.lionsgate.com

ABC Studios is a leader in the development, production and strategic distribution of entertainment content across broadcast, cable and on demand platforms. The studio is the key content provider for the ABC Entertainment Group, having produced multiple seasons of hit series, including current shows "American Crime," “black-ish,” “Quantico,” "Grey's Anatomy," "How to Get Away with Murder,” “The Real O’Neals," "Marvel's Agents of "S.H.I.E.L.D.," “Mistresses,” "Once Upon a Time," “Scandal” and "Secrets and Lies" for ABC; "Criminal Minds,” Criminal Minds: Beyond Borders” and "Code Black" for CBS and "Devious Maids" for Lifetime.

Opry Entertainment(r), a division of Ryman Hospitality Properties (NYSE: RHP), is a producer of multi-media entertainment experiences with primary interests in location-based entertainment and television and stage production. Based in Nashville, Tennessee, its core business segments include the world-famous Grand Ole Opry(r), the historic Ryman Auditorium(r), and legendary radio station 650 AM-WSM.