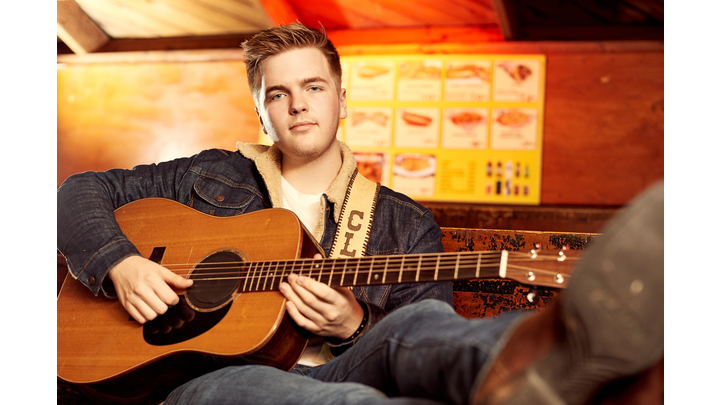 “I’m not just some kid from a singing show who can do covers. I have something different to bring to the table”

That’s Caleb Lee Hutchinson, charting a bold course for his country career and knowing it won’t be easy – especially in a landscape full of singing show graduates. But then again, he’s used to standing out.

After all, Hutchinson was the blond-haired charmer whose crisp baritone and forward thinking tastes captivated American Idol’s 16th season, and with an adventurous batch of original music on the way, he’s ready to build on those hints of artistry. One of the genre’s finest new vocals reaches back through history and combines with a cutting edge vision of modern country sonics, as classic meets contemporary in earnest.

Raised in the small town of Dallas, Georgia, just 35 miles west of Atlanta, Hutchinson came by this new generation of three-chords-and-the-truth honestly – while other kids were obsessing over sports, he was doing the same with music. His dad schooled him in classic-country icons like Waylon Jennings and Merle Haggard, his mother loved the electronic energy of ‘80s pop, and an uncle kept heavy-metal legends like Black Sabbath and Led Zeppelin in constant rotation.

At five years old the youngster learned to sing on a karaoke machine, then picked up a guitar and began setting up “shows” in his uncle’s basement. He learned Johnny Cash’s gritty “Folsom Prison Blues” as his first song and was soon winning local talent shows – even opening concerts for trad-country stalwarts like Gene Watson and Rhonda Vincent in middle school. But by his senior year, a restless creativity began to emerge, with Hutchinson posting countrified covers of hip-hop star Post Malone online and foreshadowing his story to come.

In 2017 he took that spirit to American Idol, moving seamlessly between his love for traditional giants like Keith Whitley and rough-hewn modern stars like Sturgill Simpson. He stood out immediately as fans latched on to his dynamic Southern vocals – just as resonate on Carrie Underwood’s “So Small” as they were on Prince’s “When Doves Cry” – and by the show’s finale he had earned a strong second place finish. But it felt more like a beginning than an end.

“Half the reason I took a chance and did Idol was because my parents were like ‘You only get one life. You don’t want to look back when you’re 50 and wish you had tried a little harder,’” Hutchinson says. “There’s a path in country that nobody’s really on right now, and even if the music I make is a little out in left field, at least it will be something you’ve never heard before.”

“There ain’t no point in doing something if 100 people are doing it already,” he says. “If I’m really gonna do this with my life and I’m really gonna take a leap of faith, I might as well do it in a way that means something to me.”