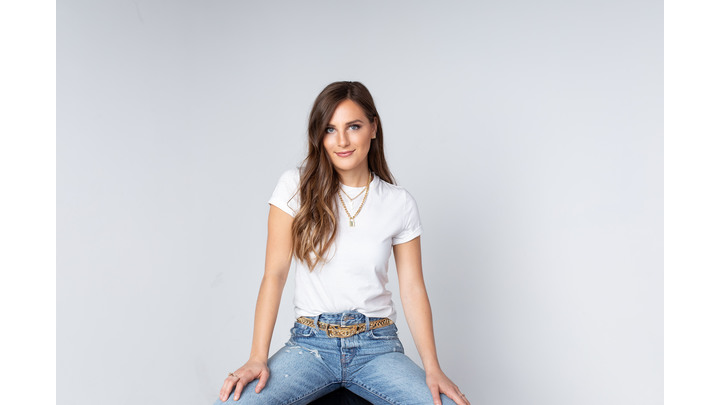 To rising country singer, songwriter, and musician Madison Kozak, it feels fitting that herdebut, “First Last Name,” pays tribute to a father-daughter relationship. Not only did thetouching ballad kickstart her career by leading to a publishing deal with powerhousecompany Big Loud, but it also feels meaningful because it was Kozak’s dad who taughtthe Nashville-based artist everything she knows and loves about country music. Growingup the seventh child in a family of eight siblings in rural Ontario, Kozak treasured precioustime with her father, who introduced her to the greats — Loretta Lynn (Kozak’s firstconcert), Patsy Cline, Dolly Parton, Johnny Cash and June Carter Cash — and also taught her to play guitar when he discovered she loved to sing.

“Where I come from, kids and their parents would go to a hockey tournament everyweekend,” Kozak says. “My dad and I were a little different. We would pack up this 1973convertible Eldorado Cadillac, which was like my tour bus with my logo printed on theragtop, and head out to the nearest county fair, festival, retirement home, or church —anywhere we could get in to play country music. That's just what we loved to do. My momwould make me little outfits, a matching cowboy hat and cowboy boots, and hot glueembellishments on my cowgirl shirts. That's where it all started.”

When Kozak was 10, she entered a singing contest at a country music festival in Ontario,the annual Havelock Country Jamboree, and won. “I'll never forget when they announcedmy name as the winner,” she says. “My parents started bawling. I think they were shockedbecause they'd never seen their kid, or any kid for that matter, perform without fear forthat many people. I just felt like the stage was my living room. It was like performing asong with my dad at home was no different than performing it on a stage in front of 10,000people. Now I like to joke that I peaked when I was 10,” she adds with a laugh.

That, of course, is not true. Now 22, Kozak is primed for a big future. At 14, she convincedher parents to move to Nashville where she continued to hone her skills as a vocalist andalso learned that she wanted to write songs — a discovery she made while studying musicbusiness at Belmont University. “I was so inspired by the creativity of people my own ageand getting to write from the heart while I was there,” she says. “I was really encouragedto do that and kind of come into my own. ‘First Last Name’ was one of the first songswhere I felt, ‘Okay, I can do this,’ because it was the first time I got in a writing room andwas completely honest. I didn’t worry about what my friends might want to hear or whatthe radio wanted to hear. It was just me telling my story.”

Co-written by Kozak with Claire Douglas and James Slater, “First Last Name” is a stellarshowcase for Kozak’s gentle twang and vivid, detailed storytelling. Singing with heartfeltauthenticity, she describes her dad as “the son of a salesman” and “one hell of a backseatdriver” who puts his “pocket change on the counter” and isn’t “much of a crier till you’re halfway down the aisle.” Kozak wrote it during her junior year of college when she realizedshe didn’t have a gift for her dad for Father’s Day and decided to write him a song.

“I got all in my feelings and started playing these vignettes in my head from when I wasyounger, like a home movie of different times when we would hop in the car and drivefour hours to go play a 20-minute set with a band we'd never met, singing the Dixie Chicksat the top of our lungs in that Cadillac, or him coming to my dance competition,” she recalls. “I walked into the writing room and said to James and Claire, ‘I want to write asong about my dad.’”

“When I first moved to Nashville, I kept hearing one piece of recurring advice, which wasthat was that ‘three minutes can change your life,’” Kozak continues. "And that's exactlywhat happened with ‘First Last Name’ — all these amazing opportunities because of onesong.” Kozak was discovered when she performed ‘First Last Name’ for a panel ofpublishers that Belmont put together to critique the students’ work. There were fourpublishers on the panel, including Big Loud. By the time Kozak finished singing the firstchorus they were all weeping

.It wasn’t long before Kozak found herself opening for Willie Nelson and Morgan Wallen,as well as performing at Nashville’s legendary Bluebird Café and CMA Fest. Kozak isalso a newly minted recording artist — the first signed to Songs & Daughters, Big Loud’snew female-focused joint label venture with award-winning songwriter Nicolle Galyon.The company’s mission is to be a music house for female creatives and address thegender disparity in country radio by nurturing female artists. Kozak describes Songs &Daughters president Galyon – who has written hit songs for Dan + Shay, MirandaLambert, and Keith Urban – as a mentor before the two even met. “She was a biginspiration to me as a female writer who also came out of Belmont and worked really hardto make a name for herself in Nashville. I really looked up to her and still do.”

Kozak’s career has come full circle in other ways. She recently performed “First LastName” at a charity event headlined by Urban at Nashville’s fabled Ryman Auditorium. “Itwas just me and my guitar in that beautiful mother church,” she says. “My dad was in theaudience and I thought about how we toured the Ryman on our first trip to Nashville whenI was 10. He took my picture outside the building and I told him, ‘I'm going to play heresomeday.’ To see these things come to fruition … it might sound cheesy, but it’s a dream come true.”