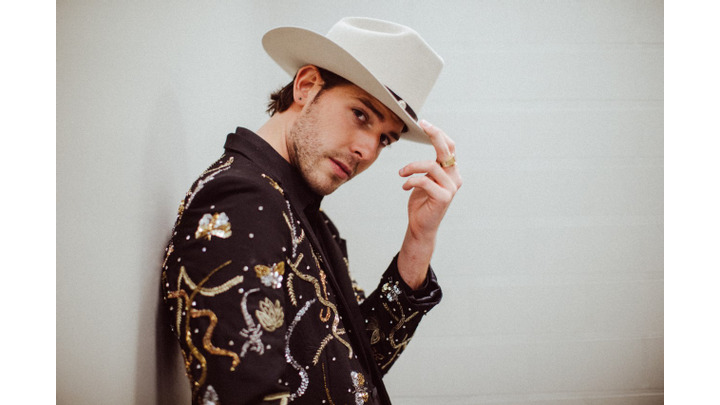 Sam Williams never met his grandfather, but he feels his blood coursing through his veins every single day.

“There’s a lot of pain burned into my DNA,” says Williams. “But pain can be a beautiful thing if you know how to deal with it.”

Indeed, Williams’ extraordinary debut, ‘Glasshouse Children,’ is proof of that. At its core, the record is a gorgeous meditation on hurt and healing, on growth and loss, on sin and redemption, but more than that, it’s a reckoning with fate and free will and the family ties that bind us. The grandson of country pioneer Hank Williams and the son of outlaw legend Hank Jr., Williams is the latest in a long line of American originals, but he’s not here for the sake of tradition or legacy. He sings with his own singular voice and he writes in his own singular style, fusing gut-wrenching honesty and plainspoken poetics with raw vulnerability and deep empathy. His songs are lush and cinematic, influenced as much by modern pop as classic country, and they grapple with the kind of profound, revelatory introspection that belies their author’s young age. At just 22, Williams has already been through a lifetime of struggle and heartbreak—‘Glasshouse Children’ took on new meaning shortly after completion, when Williams’ beloved sister, Katie, was tragically killed in a car wreck—and he comes across as an old soul on the album, a gentle, sensitive seeker searching for his place in a cold, hard world.

“When you’re coming out of adolescence and into early adulthood, that’s the period where you’re really reconciling where you come from with who you are and who you want to be,” says Williams. “I found my purpose as a writer was to explore those sorts of existential issues, not only for myself, but for everybody else who’s out there listening and wrestling with the same questions I am.”

Growing up in rural Paris, TN, Williams was reluctant to even imagine his current career trajectory. It wasn’t that he didn’t love music (particularly the hip-hop, pop, and R&B that he discovered on the radio as a youngster), but rather that it came with so much inevitable baggage. What if he didn’t want to sing country songs? What if people didn’t take him seriously? What if he couldn’t live up to their expectations?

“To be honest, I shied away from making music for a long time,” says Williams. “It was never pushed on me, which made it easier, but as a kid, more than anything, I just wanted to be normal, so I was really hesitant to go down that road.”

Intending to pursue a life far different from that of his father and grandfather, Williams moved to Nashville to study business in college, but it proved to be a poor fit. At 19, he had a son of his own, dropped out of school, and made peace with the fact that he couldn’t run from his past forever. He’d been writing music and poetry on the side for years, but now he decided to dive in headfirst, collaborating with top shelf songwriters like Jim Lauderdale, Lori McKenna, and Mary Gauthier on genre-busting tunes that reflected his wide-ranging love for everything from Margo Price and Tyler Childers to Billie Eilish and Drake.

“I discovered that writing songs with other people really brought out something new in me,” says Williams. “It wasn’t always easy, but there’s just something so powerful about laying all your cards on the table with somebody else and turning that into art.”

“I had this song called ‘Happy All The Time’ that I’d been sitting on for a couple years,” says Williams. “I’d always envisioned Dolly singing on it, so I wrote her this two-page letter on an old typewriter, and when it finally got to her, she loved the track and said she’d be honored to sing on it. That changed everything for me, because suddenly I had this duet with Dolly Parton on my hands, and I knew I was going to have to really push myself if I wanted to write an album of songs powerful enough to stand alongside that.”

Recorded primarily with Nashville studio wizard Paul Moak (Joy Williams, Ashley Monroe), ‘Glasshouse Children’ more than rises to the challenge. The collection opens with the stirring orchestral sweep of the title track, a co-write with Ronnie Bowman and The Black Keys’ Dan Auerbach, which finds Williams’ tender, plaintive vocals front and center as he reflects on the ways in which past trauma can shape our present strength. It’s an undeniably beautiful tune, but like much of the album, it’s haunted by a sinister undercurrent lurking just beneath the surface, a hint of darkness that threatens to swallow Williams whole should he ever allow himself to surrender to it. The wistful “Happy All The Time” struggles to fill the kind of void no material wealth ever could, while the stripped-down “Bulleit Blues” stares despair dead in the eye, and the poignant “Can’t Fool Your Own Blood” comes to terms with the damaging cycles we inherit from our families. “I know roads that I don’t walk down,” Williams sings with equal parts dread and determination. “They take me places I don’t want to go again / But now and then I take a wrong turn / And then the lost highway claims me its own.”

“I was thinking a lot about my lineage when I wrote that song,” says Williams. “There’s incredible brilliance and accomplishment in my bloodline, but also devastating alcoholism and tragedy. For all of the mystique around my grandfather’s life and death, I have to believe that he’d regret passing away so young. He was just 29 when he died, and my dad was only three. I’ve got my own three-year-old now, and as much as I want to be a great artist, more than anything, I want to be a great father.”

The fragility of life is something Williams has grown all too familiar with in recent years. His sister’s sudden death was profoundly devastating, but the journey of grief and self-discovery Williams found himself in the wake of her passing led to a deeper understanding of his purpose in life. It also inspired him to introduce the album by releasing slow-burning single “The World: Alone” on what would have been Katie’s 28th birthday.

“That song was never slated to be a single,” says Williams, “but I knew no other way to honor Katie’s memory. She was front row at my Opry debut and always my biggest cheerleader. I wrote the track a year before her passing, having no idea I would be detailing a tragedy and the loss of a dream, but the music lives and grows, and I understand now that I was destined to do this and have to carry on.”

While Williams’ writing is often weighty and consequential on the album, he’s careful to balance it out with moments of hope and joy, as well. The soaring “10-4,” written with GRAMMY-winning producer/songwriter Daniel Tashian (Kacey Musgraves, Lee Ann Womack), is a country-pop gem all about losing yourself in the ecstasy of new love, and the swaggering “Wild Girl,” a co-write with The Cadillac Three’s Jaren Johnston, dips its toes into a more hip-hop inspired palette as it celebrates the fire we all carry inside. Even when Williams is picking up the pieces of broken promises and faded desire on tracks like the urgent “Dream Anymore,” he still finds reason to walk tall, remaining true to himself above all else.

“At the end of the day, I wasn’t interested in making something just to say I did it or to pat myself on the back for honoring some kind of family tradition,” says Williams. “A legacy doesn’t mean anything if you’re not carrying it on with truth and integrity. I want to make Katie and my grandparents in heaven so proud. I owe it to them.”

After all, as Williams so eloquently sings on the album, you can’t fool your own blood.