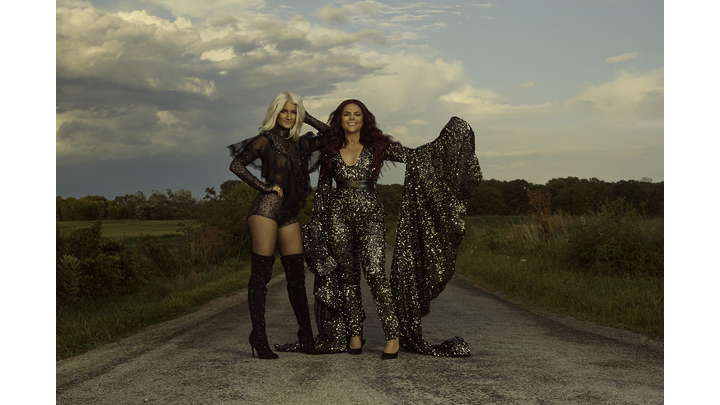 Some people really are born with silver spoons in their mouth, that’s true. But for most of us, the road behind is hardly paved in gold. For Warner Music Nashville sister duo Walker County, the road wasn’t even paved. And for this tight-harmony singing pair, that’s a point of pride.

“We’re all a bunch of dots on maps little towns, that nobody's heard of,” goes the small-town repping chorus of their new song. “Be proud of where you came from, nobody's from the Hamptons.”

Now set to leave their mark on a fast-evolving genre, sisters Ivy (23, lead vocals) and Sophie (21, drums and harmony) are starting out with the born-and-raised country basics. With the swaying hometown anthem, “Hamptons,” they point proudly back to Sulphur Springs, Indiana – and to the mark it left on them.

“It’s where my dad grew up on his dad’s acreage, and across the road from Great Grandma and Great Grandpa Walker,” Sophie says. “Across one field was cousin Mark Walker, across another was Johnny Walker and his family and Aunt Judy was down the road. We were all in this nice little area in the middle-of-nowhere, Indiana, and we would do 4H and show pigs, it was fun.”

“But, we would wear our high heels out in the pig pen, and we’d cover the pigs in glitter when we showed them,” Ivy jumps in, laughing at the memory. “We were always a little bit different.”

Owing much to the music-loving dad who still plays guitar for the sisters today, Ivy and Sophie have never been afraid of being “a little bit different.” They grew up on the sounds of middle America, leaving the radio on full blast all day and absorbing everything from Dwight Yoakam and Lynyrd Skynyrd to bluegrass and gospel standards. Soon they were strumming along with their dad, and by the time they were 12 and 9, the girls had made their first appearance in Nashville – busking for tips with an open guitar case on Lower Broadway.

They only made $10 that first time and ended up doing what sisters do best (“I kicked Ivy and dad said we had to leave,” Sophie remembers with a chuckle), but a seed was planted. Music became the family’s calling, and they started booking gigs at churches, fairs, weddings and backyard parties every weekend. Getting paid in barbecue sandwiches, the richly-textured blood harmonies captivated crowds who were already stunned by an unorthodox singer/drummer combo and electrifying presence onstage – equal parts downtown glam and dirt-road grit.

Today, Sophie’s rock-solid rhythms mix the flash of Mötley Crüe’s Tommy Lee and the understated cool of Levon Helm, while Ivy’s strutting, soulful vocals feel inspired by everyone from Dolly Parton and Shania Twain to J-Lo and Celine Dion, capped off with a bluesy snarl that lands somewhere between Maren Morris and Amy Winehouse. And now with the help of producer David Garcia (Bebe Rexha’s “Meant to Be” featuring Florida Georgia Line, Carrie Underwood’s “Cry Pretty”), their country rock and down-home soul cocktail gets a shot of pop punch.

“We’ve always tried to keep a foot in the traditional world, and a foot in current country and style, with a little bit of pop and soul in there, too” says Ivy. “We like to go full bore, but David kind of said ‘Let’s take a step back and swag it out a little bit, pull it back and enjoy the ride.’”

Co-writing and sourcing material from Music City’s best and brightest – chart-topping names like Hillary Lindsey, Lori McKenna, Morris and Garcia himself, Walker County has now recorded its first batch of major-label tunes. “Hamptons” leads off with its easy-rolling rhythm, wide-open melody and a theme that’s much needed in a photoshopped world, but there’s more to come. After all, “Country is based on story telling,” Ivy says, “and we have a lot of stories to tell.”

Classic-country wordplay is paired with soulful blasts of rural R&B. Bluesy howlers squeeze every ounce from Ivy’s thrilling, why-me wail. Modern swagger gets pumped through the veins of timeless power ballads, and the darkest of dance floors get lit up with undeniable energy. Each track has its own personality but carries a common strand of D.N.A. – just like the girls themselves. It’s music for anyone, from anywhere … as long as they know who they are and shout it with pride.

“We love how we grew up, and we’re proud of it,” Sophie says. “We talk about Sulphur Springs everywhere we go, with everyone we meet, and we want other people to feel that proud of where they’re from, too. Our town made us who we are, and this music is us saying ‘Here we are, we’re ready.’”