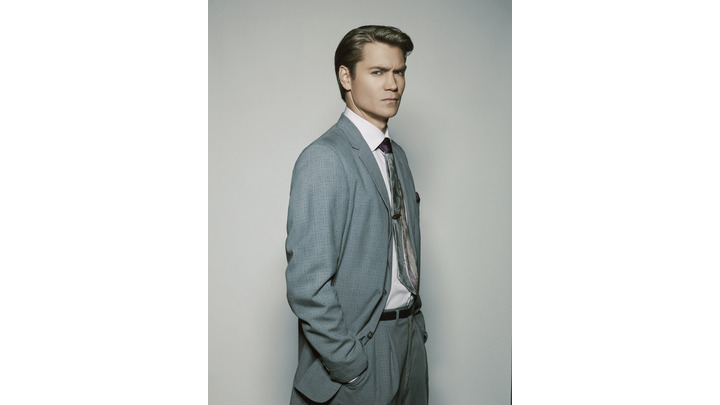 Actor and author, Chad Michael Murray, has showcased his brooding good looks and talents on television sets and silver screens for over a decade. Chad is currently starring as Agent Jack Thompson on the Marvel & ABC Studios series AGENT CARTER. He is also leading the cast of the paranoiac thriller CHOSEN as fan favorite, Jacob Orr, on Sony’s online network, Crackle.

Most recently, Chad starred in the film Outlaws & Angels, which debuted at the Sundance Film Festival in January 2016. The film was named one of Variety’s Top 21 Films of the Festival.

The second oldest of five siblings, Murray was born and raised in Buffalo, New York. Throughout his childhood, Chad was more the ‘jock’ than the ‘drama nerd,’ with an active role on the football and track teams. His love of film did start early on though, which he credits to films such as American History X, Primal Fear, Varsity Blues, and Taxi Driver" and he moved to Los Angeles after high school graduation to become an actor.

By the age of nineteen, Murray landed his first guest starring roles on Diagnosis Murder, Murphy’s Dozen, and MTV’s Undressed, and soon-after came Gilmore Girls and Dawson’s Creek, where he played Alexis Bledel’s overconfident classmate and Katie Holmes’ and Michelle Williams’ love interests, respectively. Next, Murray landed the starring role on the long-running WB/CW soap, One Tree Hill, where he played Lucas Scott, the leading man and every fan girl’s crush. Murray returned to One Tree Hill this for its final season, a thank you to his loyal and dedicated fans. As an homage to his fans, Chad recently joined Rachael Leigh Cook in a Funny or Die parody on nineties teen films, entitled First Kiss. Chad can also be seen in a multi-episode arc on FOX’s hit new show, Scream Queens.

On the big screen, recent roles of Chad’s include the Octavia Spencer/Forest Whitaker produced, critically acclaimed film, Fruitvale Station, Lionsgate’s The Haunting in Connecticut 2: Ghosts of Georgia, the comedy Cavemen (Camilla Belle, Skylar Astin,) Tyler Perry’s A Madea Christmas, and Left Behind (Nicolas Cage) expanding his repertoire of roles from intense scenes as a police officer and loving father to comedic roles as a playboy and redneck. Up next on the film front, Chad will be seen alongside Luke Wilson and Francesca Eastwood in Outlaws and Angels. The film is debuting at Sundance Film Festival.

Earlier in his career, Murray also starred as the lead in Joel Silver’s remake of House of Wax opposite Elisha Cuthbert and as Prince Charming in Warner Brothers’ A Cinderella Story (opposite Hilary Duff). Other credits include Disney’s critically acclaimed remake of Freaky Friday (opposite Jamie Lee Curtis and Lindsay Lohan,) the title role in the TNT movie, The Lone Ranger, and the the socially important indie film, Renee (Kat Dennings, Rupert Friend). He also could be seen in an arc on the TNT series Southland, opposite Ben McKenzie, and as Thatcher, the HIV-positive character, in the short film The Carrier, (Rita Wilson, Anna Paquin). Recently, Chad was seen starring in the ensemble cast of the History Channel miniseries, Texas Rising, alongside Bill Paxton and Ray Liotta.

In Fall 2011, Murray broke new ground in his career, by writing and releasing, Everlast, his first graphic novel. Everlast is a passion project of his that tells the story of the tragic hero, Derek Everlast, as he follows his journey to save the world before the ‘End of Days.’ With a successful eight-city book tour, Murray quickly sold out of the first print of Everlast and is in the process of writing two follow-up novels, as well as an unrelated romantic prose story entitled American Drifter.

When Chad isn’t working, he is active in charities for children and teens, including Buffalo’s own Hunter’s Hope Foundation, Falling Whistles, and the Elizabeth Pediatric Aids Foundation. He is also a diehard Buffalo Bills and Sabres fan.